When people look for good, all-round binoculars, they’ll often invest their money in 10×50’s. With the power needed to produce close-up views of almost any target under a wide variety of light conditions, they’re the go-to choice for everyone from hikers and hunters to astronomers and bird-watchers.

But what should you look for when choosing 10×50 binoculars? And which ones are best?

What Do the Numbers Mean?

You’ve probably noticed that all binoculars have two numbers associated with them, whether it’s 10×50, 8×42, 15×70 or some other combination. The first number indicates the magnification of the binoculars, while the second tells you the aperture of the objective lenses, as measured in millimeters.

The second number, the aperture, works differently but is no less important. The aperture refers to the large objective lenses at the end of the binoculars. These are the lenses that you point toward your target. The smaller lenses, at the other end, are the eyepieces that you look through.

Bird watchers, and anyone using the binoculars during the daytime, may not notice a big difference. However, if your birds are active at dusk, you use your binoculars for hunting at night or you’re into astronomy, the light-gathering power of a larger aperture will allow you to see more.

Perhaps not surprisingly, there’s a downside: the larger the aperture, the heavier the binoculars, and weight is definitely an important factor when it comes to choosing the right binoculars for you.

There’s a good reason why 10×50 binoculars are pretty much the standard: they can be used for almost any activity you need binoculars for. The combination of magnification and aperture means you’re able to see your target close-up and under a variety of light conditions.

This makes them an ideal choice for both daytime and nighttime use and for a wide variety of activities. For example, they’re powerful enough to produce great, close-up views of birds, planes, sea life and scenery, while the 50mm aperture gathers enough light for them to be used for bird watching at twilight or star gazing and hunting at night.

How to Choose the Best 10×50 Binoculars

There are a number of factors you should take into consideration when buying 10×50 binoculars, but four of the key factors are:

In many respects the importance of each factor will vary, depending upon what you need the binoculars for. Weight and prism configuration can be considered to be important, no matter what, while optical quality can make a big difference if you intend to use the binoculars for astronomy.

Lastly, water resistance may be important if you intend to use the binoculars during the daytime, but not so important for astronomy. After all, you won’t be seeing many stars if it’s raining, but you’ll still  want to go for binoculars that are at least water resistant and, ideally, fogproof.

While holding your binoculars up to your eyes for a few moments may not cause arm fatigue, any longer than a minute or two can be a problem – especially if you need to use them a lot.

On average, 10×50 binoculars weigh about 800g (1.8 pounds) but this can also depend on the prism configuration (see below.)

There are two basic types of prism configuration: porro and roof. Porro prism binoculars are the traditional binoculars you’ve often seen in movies and on TV. They have two large barrels that are slightly offset from the eyepieces, giving the binoculars a W shape.

Roof prism binoculars are a more recent invention and first became popular in the latter half of the 20th century. They have straight barrels, giving the binoculars an H shape, and are designed to be more lightweight and portable than their porro prism siblings.

This potentially makes them a better choice for hikers, but one downside to their compact design is that the apertures tend to be on the smaller side, with most maxing out with an aperture of 40mm or 50mm.

Besides weight, there are a few other differences to consider. The configuration of the prisms in porro prism binoculars provides a slightly better quality image, and they also tend to be a little less expensive to produce, but the price you pay can greatly depend upon the manufacturer.

Essentially, the biggest difference is in weight and, consequently, portability. With this in mind, if you’re a hiker or you intend to be on-the-go a lot, roof prism binoculars might be the better option. If, however, you plan on staying in one spot or image quality and aperture is important, then the traditional porro prisms are probably best.

(And if the binoculars are large and heavy, you can always connect them to a tripod.)

The quality of the optics can make a big difference in the quality of the image you’ll see. For example, binoculars can sometimes show chromatic aberration; this is the rainbow effect you might see when looking at a high contrast object (such as the Moon.) It’s hard to eradicate completely, but it’s far more noticeable in cheaper binoculars and those not produced by a reputable manufacturer.

There are a number of factors that contribute to the quality of the image, but two of the most important are the prism type and the coatings.

Essentially, there are two types of prism: BK-7 and BaK-4, with BK-7 being the inferior of the two. Most of the time, BK-7 is fine, but for a hobby like astronomy, BaK-4 is usually preferable (but not necessary.) Amateur astronomers will often use a star as a focus reference point, and being able to fine-tune the focus can make a lot of difference.

Either way, binoculars with other prism types should be avoided.

It’s a similar story when it comes to the coatings applied to the optics. These are anti-reflective coatings and can improve the quality of the image seen through the eyepieces.

When purchasing your binoculars, only multi-coated (MC) and fully multi-coated (FMC) are really viable options. Again, like the prism types, these are the two coatings most favored by reputable manufacturers, so any binoculars from unknown brands that say their optics are simply “coated” should be avoided.

While most binoculars from reputable manufacturers are water resistant, some might argue that having binoculars that are waterproof is really a matter of personal choice. As mentioned before, it could come down to what you need the binoculars for.

If you’re a bird watcher or a hiker and may need to use the binoculars throughout all kinds of weather conditions, then waterproof binoculars can be a good idea. This is especially true if you’re going to be using them near water, such as a river or on the beach.

If you intend to use your binoculars for astronomy, you might not feel it’s necessary to have waterproof binoculars. After all, you won’t see much if the skies are overcast and it’s raining. However, it’s worth considering fogproof binoculars as the temperature and humidity could cause your optics to mist over.

There are a number of reputable binocular manufacturers on the market, such as Steiner, Celestron, Nikon, Bushnell, Olympus and Pentax. Generally speaking, Steiner and Celestron can be relied upon to produce good quality binoculars (since optics are their business), while cheap binoculars from unfamiliar manufacturers should be avoided.

If you’re looking for a good, all-round performer that won’t break the bank, you can’t go wrong with the Bushnell PowerView 10×50 binoculars. Besides being inexpensive, these porro prism binoculars aren’t too heavy (700g, 1.5 pounds) and feature multi-coated optics and a decent field of view of 341 feet at 1,000 yards.

The downside? While Bushnell promises them to be shockproof, they’re not waterproof, so it might be worth keeping them inside during rainy weather. 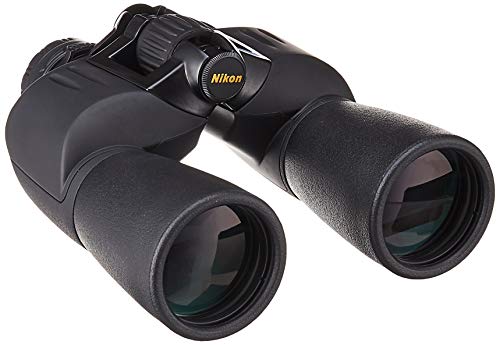 While most 10×50 binoculars weigh around 700g, Nikon’s CF Action EX 10×50 binoculars are much lighter – just 136g, or roughly a third of a pound. This is all the more impressive considering they are porro binoculars, rather than the traditionally lighter roof prism.

In addition to this, you’ll find these binoculars have the better quality BaK-4 prisms and are also waterproof and fog proof, making them a good choice for hikers, birders and astronomers alike.

There are a couple of drawbacks. Firstly, the optics are multi-coated, rather than fully multi-coated, but this may be a minor consideration when all the other positive factors are taken into account. The other issue is the cost, which is higher than most other 10×50’s.

Celestron has an excellent reputation for manufacturing quality telescopes, binoculars and accessories, and one of their most popular lines is the UpClose. These come in a range of sizes, from 7×35 to 20×50, with the 10×50 model sitting comfortably in the middle. On the plus side, their weight is about average (760g or 1.7 pounds), the field of view is respectable (354 feet at 1,000 yards) and they feature multi-coated optics.

However, while Celestron are known for producing quality equipment to suit a wide variety of budgets (and the UpClose G2 binoculars are no exception), it should be noted that these don’t have some of the bells and whistles you’d expect from more expensive models. Most notably, they have BK-7 prisms and are water resistant, rather than waterproof. That said, these are a great choice for anyone looking for a solid, inexpensive all-round performer.

When it comes to all-purpose binoculars, it’s hard to beat 10×50’s. They have the perfect combination of magnification and aperture, allowing you to take them almost anywhere and use them under almost any conditions. When you also consider that most are also lightweight and inexpensive, it’s easy to see why so many people choose to use them!

The great thing about 10×50 binoculars is that they’re an outstanding all-round performer. Whether you need binoculars for bird watching, whale watching, hiking or astronomy, good 10×50 binoculars are more than up to the task. They’re capable of producing quality close-up views of whatever you turn them toward, whether it be wildlife, sea life, the scenery or even the night sky.

This is a little like comparing lemons to oranges; it depends on what you need them for. While 20×50 binoculars have twice the magnification that doesn’t mean you’ll see more, as both have the same aperture (50mm) and are therefore capable of gathering the same amount of light.

As a result, you’ll see the target and the same amount of detail, but the target will appear twice as large in the 20x50s. This is probably fine for daytime use (such as birding) but not so good for astronomy. If you’re looking at the Pleiades star cluster, you won’t see any more stars in the 20×50’s, the cluster will simply appear larger and fill more of the field of view.

Are 10×50 binoculars good for astronomy?

The short answer is yes, they’re ideal, especially if you’re new to the hobby, as 10×50 binoculars offer a great compromise between power and weight. Smaller, lighter binoculars tend to have lower magnifications and smaller apertures, making it hard to spot fainter objects. However, larger, more powerful binoculars (eg, 15×70) tend to be heavy and will often require the use of a tripod. Good 10×50 binoculars have both the magnification and aperture you need, but won’t weigh so much that you’ll struggle to use them.